Roz reports from the OAR team base in St John’s 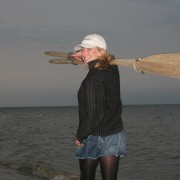 The OAR team has been reunited in St John’s, Newfoundland, the port of departure for the OAR. We’re in the final stages of our preparations and all keeping a close eye on the weather forecast. 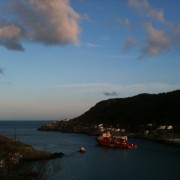 On the morning of Sunday 6th May, I got up at 4am to catch a flight to St John’s, Newfoundland, and arrived around 23 hours later. Sadly, my luggage didn’t, and is still wandering around somewhere in the system, but I live in hope. Luckily I’d put the really vital stuff into my carry-on. Forget underwear and wash bag – the vital stuff was the satellite phone and two brand new Optimizer Accesspoint units that will turn Bojangles into a mid-ocean wifi hotspot.

I spent most of yesterday afternoon getting it set up, with a few phone calls to OCENS tech support along the way, and now have it all working perfectly. I’ve managed to send emails from both of my iPhones (!) and my iPad. This is how I plan to blog from the ocean. Various other organisations will also be reposting content from my site from time to time, including One World One Ocean, United Nations Environment Program, TED, Mission Blue, and Fitocracy. 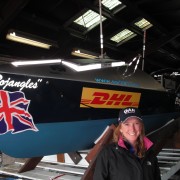 Yesterday I also spent some time at the garage workshop where Bojangles currently resides. Andrew (aka Mos) has the bit between his teeth on the boatworks, and is busy tying off the last loose ends on our trusty vessel. A few final fixes and enhancements have also been added to the job list. Reassuringly for me, Mos is a real perfectionist. Even the paintwork is being airbrushed into perfection, although in retrospect maybe it wasn’t such a good idea to wield an airbrush while he was wearing expensive designer jeans….

Last night we had a team dinner in St John’s. In attendance were Mos with his two children and his parents, Naomi Coe our project manager, Harry and Diane Spurrell  who are hosting Naomi and me, and Greg Jamieson who has been such an incredible supporter, connector and maker-of-things-to-happen.

To satisfy my curiosity, Greg ordered the moose soup just so I could see what it looked like. I confess to being just a little disappointed that it looked just like a chunky meat broth, and did not have a big pair of antlers sticking out of it.

We are now getting daily weather updates from our weatherman Lee Bruce with a view to determining our Estimate To Depart. It’s not looking too promising at the moment, for the next 5 days at least. We need a little bit of west in the wind to help us clear dry land, and relatively light winds while we cross the notorious Grand Banks, where waves reaching the sudden shallows of the continental shelf can pile up into rough and messy sea conditions. For now the extra time on land is welcome, but if we are to arrive in London in time for the Olympics, we won’t want to wait for too long.

Safety remains paramount, so we won’t leave until and unless the conditions are right. Better to arrive late than not at all.

If there is by any chance anybody who is flying from the UK to St John’s in the next few days, please let me know. We already have a compass mounted in the bulkhead above the hatch to the aft cabin, a few feet from the rowing position, but being slightly optically challenged I’d like to have a Silva 70UNE compass mounted between my feet but haven’t been able to find a supplier who can ship it to arrive in Canada by 14th May – but we could arrange for it to be delivered to a UK address if there was someone able to personally courier it to us. Any help much appreciated.

We are also looking for a support vessel (or a relay of passing vessels) to accompany us for the first couple of hundred miles as we cross the hazardous Grand Banks. If you know of anybody who will be crossing the North Atlantic in the next couple of weeks, please let us know.