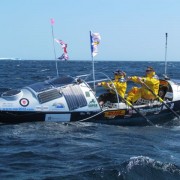 I had hoped that this would be a final blog to bid farewell to dry land before we started our voyage across the North Atlantic. But if you’ve been following my blog over the last couple of weeks you will have noticed our growing concern about the unusually large quantities of ice off the coast of Newfoundland, largely due to the huge chunk of ice that broke off a Greenland glacier 2 years ago which has now drifted south into Canadian waters, breaking up into a minefield of icebergs as it goes.

Given our immovable deadline of reaching London in time for the start of the Olympics, we unfortunately don’t have the option to wait until the ice dissipates, which will take another couple of weeks at least. After much soul searching, it is with regret that we have come to the difficult decision to postpone our row for this year. The chances of hitting ice – and the serious consequences of a punctured hull in freezing North Atlantic waters – meant that the risk to our safety was simply unacceptable.

I weighed up the pros and cons of carrying on with the row. There were 7 points on each side. But when one of the “con” points is “risk of death significantly higher than anticipated”, you really have to give that one a higher weighting.

One of the most agonising aspects of this decision was the huge amount of support we have received from our many friends and sponsors who have contributed time, energy, money, and provisions to our project. We struggled with this, feeling we owed it to our supporters to complete what we set out to do. But as the chances of a successful completion dwindled, we concluded that our supporters would probably prefer to see us exercise our professional judgement rather than persevere against the odds. We would have loved to share a glorious success story with you, but hope that you will understand and respect our reasons.

As my crewmate Mos put it, “We came here to do something inspiring, not something stupid.” We take our responsibilities as potential role models very seriously, and did not want to set a bad example by recklessly putting ourselves in unnecessary danger. Nor did we want to have to call on the Canadian Coastguard for assistance. That would do nothing for our own reputations, nor enhance the attitude towards future ocean rowers wishing to leave from St John’s.

It seems ironic to me, as an environmental campaigner, that our bid to row the Atlantic has been scuppered by the disintegration of the Greenland ice sheet, most likely as a consequence of climate change. We will be making this point as we announce the postponement of our row, in the hope that we can at least salvage something meaningful from our disappointment.

We would like to thank you all very much for having supported us and for following our fortunes. One of the silver linings to come out of this project has been the incredible love and support of many wonderful people across two continents. Mos and I are both tremendously grateful.

We hope that you will continue to watch this space for future announcements.

With thanks and best wishes