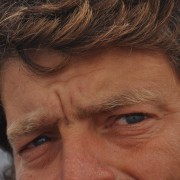 END_OF_DOCUMENT_TOKEN_TO_BE_REPLACED

The stark reality of life at sea

Mick describing the ship which rescued him.

It’s been a busy few hours on the world’s oceans for ocean rowers… and their rescuers! In the last 48 hours the six crew of Sara G were rescued from the Atlantic, while on the other side of the world in the Bass Straight, a crew of three requested assistance.

It’s a stark reminder that the ocean is in charge. Always. Whilst it would be easy to assume that these rowers were inexperienced or unprepared, the reality is that these boats were skippered and crewed by some of the most experienced ocean rowers in the world.