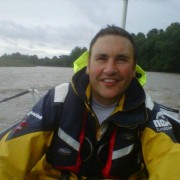 It was an early start for the OAR team as Andrew ‘Mos’ Morris got ready to depart on his two week adventure through the British Inland Waterways, raising money for the Rowing Foundation.  Originally due to set off from Clevedon on the South West coast of England, once more, mother nature was determined to put us all to the test. Heavy rain and a narrow slipway meant going with the contingency option of putting Bojangles in the water at Portishead, just up the road. 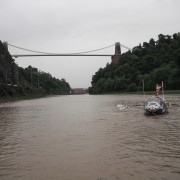 After half an hour of rowing, Mos was ready to make the turn into the River Avon. The Bristol Channel is not a force to be easily reckoned with. On the open ocean, Bojangles is built to ride with the waves, but a heavy tide and strong wind meant maneuvering her away from the shipping lanes and into the safety of the river was no easy task for Mos. Luckily a helping hand was near and the support boat was able to give her a nudge in the right direction. Many thanks to Nathan our willing and able skipper!

“Rowing up the River Avon and into Bristol was great” said Mos. “For the most part, the rain held off and I could relax and enjoy the scenery. Coming underneath the Clifton Suspension Bridge was fantastic. It definitely gave you a sense of perspective looking up as to just how small Bojangles is.” 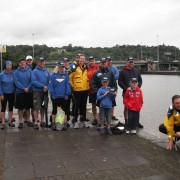 “It was also great fun to be accompanied by the team from the Clevedon Pilot Gig Club. We both assumed the other boat was further up the river and were pushing on full steam ahead to catch up. The Gig had departed late after waiting for the right tides. It was a close finish as both boats were reunited in the Cumberland Basin!”

“For now, the blisters aren’t too bad and I’m actully looking forward to spending the night on board Bojangles. We’ll be keeping a close eye on the weather over the next 24hours or so. All this rain has to go somewhere, and is likely to coincide with our route to Bath, further up the River Avon.”