Andrew Morris takes Bojangles down the historic Henley Royal Regatta course, after stopping for a spot of lunch at the world famous Leander Rowing Club.

Today was a day of two halves for Andrew ‘Mos’ Morris and the OAR team. It was an early start from Bristol where Mos was joined by journalist Peter Crush. Familiar with rowing on the River Thames, he soon learnt that rowing Bojangles, our 800kg ocean going boat, was an entirely different sport.

The end of the Bristol basin was as far as Mos was allowed to take Bojangles, however. Flooding on the river Avon meant the Harbour Master at Bristol and river authorities determined no boats were allowed to leave the safety of  the harbour by water.

Undeterred, team OAR went for plan B… A short while later, Bojangles hit the water once more at Bath, where we were joined by a whole host of helping hands from the Amber Foundation . The Amber Foundation helps homeless young people gain confidence, motivation and skills to get their lives back on track and find work.

” A total of 8 Amberteers got stuck in opening the locks and manning the ropes to help Mos through Bath city centre. Consensus was everyone had a really good day and thoroughly enjoyed themselves. We’re delighted to be a part of this very worthwhile venture and will be right by Mos each day for the next week lending our support” said team leader Janine.

Team OAR team was given a fantastic reception in Bath from local river champion Dave Lammings and guests, who joined Mos on the river as Bojangles became the first boat to enter the Kennet & Avon canal following the amalgamation of the waterways; the canal trusts, river authorities and British waterways.

Mos soon found that certain arts of the canal weren’t quite wide enough to entertain oars. It turns out Bojangles is easily adapted to punting!

Next stop, Bradford on Avon…

What’s next for the OAR

Andrew ‘Mos’ Morris explains what’s in store for the OAR boat and team on the British inland waterways this summer. We’ll be raising money for the OAR Legacy fund  to help get young people out on the water, rowing.

For Andrew ‘Mos’ Morris’ view on the postponement of the OAR, click here.

To read Roz Savage’s thoughts on the decision to postpone, click here.

Refitting Bojangles ready for the OAR 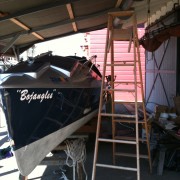 Bojangles has come a long way since her maiden voyage across the Pacific. Although still structurally sound, a lot of work has been required to get her ready for the OAR. Learning from experience, a number of improvements have also been made to her original design. Here’s just some of the things the OAR team have been busy working on over the last few months.

END_OF_DOCUMENT_TOKEN_TO_BE_REPLACED

Rowing an Ocean is much more than a physical challenge. In the first of our series of video diaries for 2012, Andrew Morris explains how he has begun preparing in the countdown to the OAR.

END_OF_DOCUMENT_TOKEN_TO_BE_REPLACED 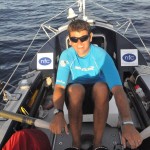 Ever wondered what life on an ocean rowing boat would be like?
Endless open water. Rowing day in, day out.
Andrew and Mick are no strangers to the highs and lows of ocean rowing. In 2005, the pair competed in the bi-annual Atlantic Rowing Race from the Canary Islands to Antigua.

Catch a glimpse of Mick and Andrew in action on the high seas.

END_OF_DOCUMENT_TOKEN_TO_BE_REPLACED

Altitude Training for the OAR 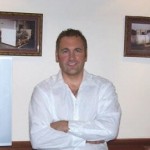 Preparation for an endurance event such as the Olympic Atlantic Row begins many months beforehand. Watch Andrew Morris in action as he begins a programme of altitude training to get him fit to face the Atlantic. As expert Ian Andrews explains, the science behind altitude training is what makes it so attractive to the world’s top athletes. END_OF_DOCUMENT_TOKEN_TO_BE_REPLACED